son, was waiting for her husband and died in sorrow there. It was originally a castle, then a brewery and a brandy keeping facility, then a jail and nowadays, it is a museum, a hotel and a performance place. Along with a lake at the foundation, it is a natural scenery of numerous festivals taking place around it from June to September.
A part of Hungary around the Giyula spa is covered by deserts and marshes, there are many thermal mineral springs, so it is naturally that the center of spa tourism is there. Varfurdo, the spa block, is situated on an 8.5 hectare area, in the park of the Almasy Castle. The Earl Almasy was a great wanderer and he used to bring a rare plant for his garden from each of his journeys. Such activity was continued by his heirs, as well, so that a unique botanical garden was created in this way, which includes at present, in addition to the rare trees,also 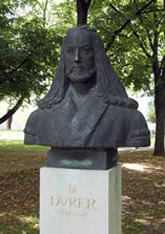 the great festivity day, April 12, during the Flower Festival announcing the beginning of the tourist season, as well. Sheltered at the Koros river, for the channels of which already the Turkish travels describing author Evlija Čelebija used to say they looked like the Venetian ones, Giyula started its history already in 1313 and it reached its peak during the rule of the King Matija Korvin. The miracle of that time is kept first of all by the nearby fortress, the town's trade mark, used by the knights to defend the Christian world from the Turks. Completely renewed this year, it celebrated its 600th anniversary. Beatrice, the wife of Janos Korvin, the King Matija's 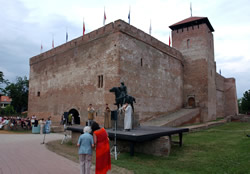 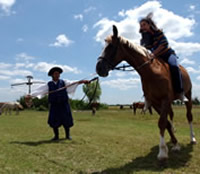 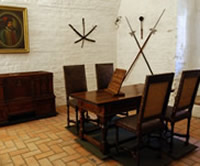 silversmith, born in Giyula, went worldwide, looking for a job. He stopped in Germany, where his son Albrecht was born. The world found in him one of the greatest artists of European culture and Giyula found a golden hen of its tourism.

numerous swimming pools. Some of them are with thermal water having the temperature from 18 to 39C. They include numerous chemical ingredients, such as chlorine, iodine, bromide, ammonium, iron, calcium, as well as sulphides, phosphates, carbonate salts, etc. In some pools, water is dark like oil, since it comes from the depth of 2,000 meters.
The kilograms lost by swimming in the pools are fast made up in the Reichard pastry shop, since 1840. In this only pastry museum in the country they keep cake making molds, primitive wooden refrigerators for ice cream and the original furniture from the past. Quite fresh cakes are made by quite old recipes and the house specialty is a cheese cake by a recipe from the year 1800.
The Giyula spa is an example how to make a lot out of a little. Everything is dedicated to tourism. From the use of the personality and work of Albrecht Duerer, through the old tree within the spa block, under which, as they state there, Erkel wrote the first hymn measures, up to organized visits to the Vesely Tavern, named by a rebel, whose main activity, just like the one of our Prince Marko, and thereby also his merit, was to make the Turks' life difficult in various ways. In Giyula, everything is dedicated to tourism, so that also many excursions near the town are organized, as

well. Within the Nemzet National Park, at the 15th kilometer from Giyula, on 300 hectares, there is the Steigerwald Farm. So called "horse riding tourism" is developed there. In addition to the welcome by home made Palinka brandy and sourdough biscuits, the tourists have got organized thoroughbred horse riding, two-wheel cart tours and groom playing, while drinking white or red wine. A unique museum of farm life history items is included in the farm. They are unique and cannot be found anywhere else. A baby beef Poerkelt (stew) to remember comes at last.
Many famous people were born in Giyula, as well, among them also Ferenc Erkel, a poet, the author of the Hungarian hymn and founder of the Hungarian opera and operetta. It is usual, as known to the tourists who celebrate the New Year's Eve in the Erkel hotel, or another one among many of them in Giyula, that at midnight, when a year turns into another one, the national (Erkel's) hymn is sung first and only then there are kisses and congratulations. The painter Mihaly Munkas, the krypton light founder Imre Brody and the physician Zoltan Bey were born there, as well. However, the best known character, visible in the whole spa, is Albrecht Duerer. His father, a talented

The Giyula spa, overfull of flowers and tourists, is not the largest one, but it is one of the most beautiful spas in Hungary. It is situated in the South-East part of the country, at the edge of Transylvania. It is 350 kilometers far from Belgrade, 220 kilometers from Budapest and 5 kilometers from the border to Romania. It has 34,000 inhabitants, of which each new born one with the name Giyula is baptized on