THE CROSSROADS OF PEOPLE AND GODS 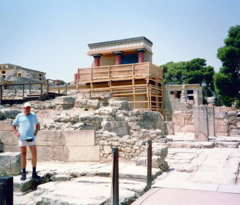 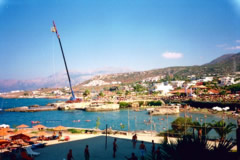 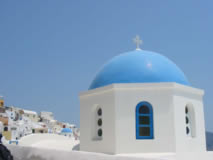 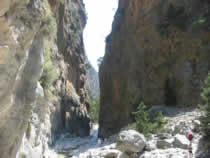 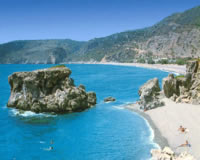 "I am yours, but as regarding singing and dancing, I am only my own. I mean, free!" 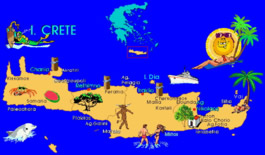 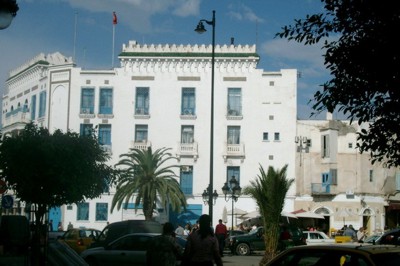 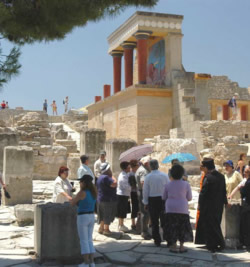 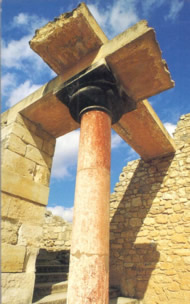 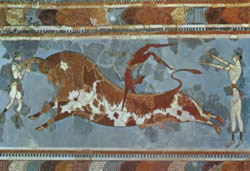 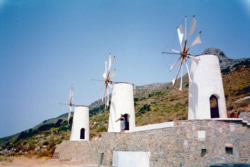 What is the Crete anyway? For archaeologists, these are the magnificent palaces in Knossos and Festos, for the historians these are the frescoes and vases with the ornaments of the old masters, for the traders these are the large cities Iraklion and Kanea, for the sweets funs the Cretan wine, bananas and black, juicy olives, for the tourists the mythology acting, more than 5,000 cultural / historical monuments, numerous great hotels, the uncountable swimming pools in the most various shapes, water parks and some sand beach, such as the one near the town Vai, in the Lassiti region, which is the registered trade mark of all tourist leaflets of the Crete with its beautiful palms.
The Crete, the fifth largest island in the Mediterranean Sea, is situated at the meeting point of Europe, Asia and Africa. The northern part of the island is splashed by the waters of the Cretan Sea and the southern one by those of the Libyan Sea. The word Crete itself is of Greek origin and it means the rule of Goddesses and something strong. This marvelous island, on which everything is made of mythology and history, presented an everlasting culture to the world, which was called the Minoan one by the explorer Arthur Evans.
The painters Damascinos and El Greco were born at the Crete. The tourist Mekka is a lively town Fodel (the former Varvari), which was built based upon the assumptions that El Greco's native home is just there, in which one can see reproductions of his works from the worldwide museums. The Crete presented also the composers Mikis Theodorakis and Manos Hadzidakis, the father of the modern Greece Elefteros Venizelos and the author of 'Zorba, the Greek', the great writer Nikos Kazantzakis. It is written in the Cretan style on his grave, in Iraklion: "I do not hope for anything, I am not afraid of anything, so I am free".

The Crete Through Legends
From the rocky and steep coasts of the Crete, a man went to the sky for the first time when Daedalus made feather wings and wax for himself and his son Icarus, in order to fly over the sea escaping from Minos, who did not let him leave the island, in order to prevent him from saying the secret of the Labyrinth. Icarus was not lucky. In his youth impatience, he went too close to the Sun and the wings melted. The nearby island, to which he felt is named Icaria. The legend of Minotaurs, a monster with human body and a bull head, who lived in the Knossos Labyrinth and ate annually seven girls and boys from Athenes, sacrificed to him by Minos, is also related to the Crete. Who knows how long it would have taken, if Theseus, the greatest hero of Athika, had not appeared, killed Minotaurs and managed to find a way out of the Labyrinth, owing to the Minos' daughter Ariadne and her string ball. The only thing he forgot was upon his return, to hoist white sails. Thus, his father, King Aegeus, having thought his son was killed in the battle with Minotaurs, jumped into the sea in his sorrow. The sea is now, after him,called the Aegean Sea.
Tourists always visit also the cave on the plain Nida on the Dicta mountain, in which, according to a legend, Zeus was born. His father Kronos was predicted that he will be thrown off the throne by his own child. Hence, not wishing to take a chance, as soon as his wife Gea would bear him a child, he would swallow it. However, in the Zeus case, he was cheated and planted a stone instead. The nymphs, shepherds and the bee Melissa raised Zeus who poisoned his father and, of course, sat on the throne. Millions of tourists visit this cave annually, for an irresistible mysticism it spreads around. Otherwise, would they in the heat first climb the steep rocky path up the mountain, free of charge, or rent a donkey for EUR.10 and then, having paid the entrance ticket of EUR.5, went down the icy underground and back. But, the imagination challenge is stronger than anything.
The imagination plays a game also in the longest European gorge, Pharaga Samaris, through which the fit tourists may walk for 16 kilometers, and in the beautiful town Agios Nikolaos (St. Nicholas), constructed in the Mirabelle Bay. In the middle of the town at the sea, there is the Voulissmeni Lake, in which, by mythology, the Goddess Athene washed her hair. It is of volcanic origin and one always believed it was bottomless and ghosts lived in it.
So, a tourist is carried away by something, walking between legends and reality, tumbling from Knossos, the seat of Minoan culture, to the five kilometers far Iraklion, the capital of the Crete. A visit to the National Museum is compulsory there, one of the most important ones in the world, overfull of exhibits made of beauty, skill and imagination.

As much the history was generous to the Crete, that much it was deprived of a mild coast and beaches by the nature. The sea that presented Poseidon, inspired Homer and cheated Odyssey, takes everything in front of itself, so that the enormous efforts and money invested annually by the Greek Government into the beach construction in the Crete always start from the beginning. There is a lot of music, songs and dances in the Crete, the one greatly introduced worldwide by the film 'Zorba, the Greek' and the magnificent Anthony Quinn, starring in it. Unfortunately, there is no more endless sea of white windmills in the Lassiti Valley, the registered trade mark of the island, which used to produce power for operating the watering pumps, replaced nowadays by cables and long-distance power lines. However, there are customs, attractive for the tourists, when a new wine is blessed, sweet white grapes 'Sultana' are picked, chestnuts are collected or oranges blossom. It is then ever easier to understand the life philosophy of Zorba, the (Cretan) Greek: There are rumors that years kill the fire in a man and he hears the death coming. That is a bunch of lies. I have enough fighting spirit in myself to conquer the whole world. That's why I am fighting".